Trump assumes control of the US Enterprise. Beam me off the ship of hate.

65% of GOP primary voters would support a ban. This result remained the same even after the question was clearly explained to them. Banning Muslims, bear in mind that Muslims are just the beginning of their hit list. I feel bad for the Mexicans, they have fallen to #2. But how could we forget about the Atheists, the Chinese, the Blacks, the Poor, the 47% Moochers, the Libtards, the Educated, the Teachers, the “anyone who criticizes the Great Don.” Who is safe? just the stooges, until they are roped into some form of below minimum wage/slave labor.

Wow—this is something that I thought that I would never have to explain. But then this poll came out. Now, I have proven time and time again that two thirds of Stupidparty Disciples have lost their ability to think critically. I wrote a book explaining why, where and how this has happened. But I never would have believed that a candidate would take center stage and prove not simply how stupid the Stupidparty has become—but proved something much worse, how this stupidity, this ignorance, this reliance on myth and false narratives—how this has lead to an explosion of clearly visible cowardly bigotry and hate. We no longer simply have to ask the question—has the GOP become a hate GrOuP?

I though Trump was bad enough when he tweeted the following when Stupidparty were panicking about Ebola:

My goddaughter went to Guinea to help battle Ebola, which was resolved by promoting education and facts, when Trump was saying any one going to far away places should suffer the consequences—but the fact was, it was those very people who controlled Ebola, preventing a catastrophe and ultimately made America safe from itself and safe from the consequences resulting from the ideas from truly awful people.

If anyone allows themselves to be terrorized by terrorists then the terrorists win. London was bombed by the IRA for a decade or so (with the tacit approval of certain American politicians, like Peter King, before terrorism went out of vogue, after the first World Trade Center bomb)—and the IRA achieved nothing because Londoners just went about their business. Carry on, stay calm. Not one person was Stupidparty enough to suggest we should be armed against this threat. Not one person suggested banning Catholics or Irish people. The overreaction from San Bernardino must be really exciting, motivating for America’s enemies. Trump and his pitch fork mob securing power would make an enemy out of me—and really I would not give a dam about the consequences.

There is already a growing demand to ban Trump from Britain—but at the moment, the government is resisting, as it does not want to be seen as interfering with American politics and we are not yet in need of an international intervention. Netanyahu has made it plain that Trump is not welcome to visit Israel.

Now you might believe that some of the below mentioned observations are unlikely. America banned from this and that. Well of course that is what logically has to happen. You can not have one country refusing to host people for purely bigoted reasons and then expect Americans to be welcome guests. South Africa found this, they were isolated and then they found their Nelson Mandela. America has their Nelson Mandela already in the White House: if his legacy is destroyed in 2016 elections, then Kristallnacht will have arrived, hate will have won—a racist emperor taking the crown and America will be at War with itself, because everyone else will be washing their hands of America. ISIS—so close from isolating their enemy. Wow again.

These observations just came to me quite rapidly. If I have missed anything I will happily make changes.

So to conclude, what does all this really mean? What does bigotry lead to in everyday America. It leads to scuffles, violence and hate at Trump rallies as his bigots push and spit on immigrant activists. A man walked into the Fatima Food Mart on 21st Avenue in Astoria on Saturday and yelled that he wanted to “kill Muslims,” then repeatedly punched the owner, according to police and the owner.  A group of Muslims praying in a public park in California were interrupted, chastised and attacked by a woman calling them murderers. “A pigs head at a mosque in Philadelphia, a girl harassed at a school in New York, hate mail sent to a New Jersey mosque … I can’t event count the amount of hate mail and threats we have received,” said Ibrahim Hooper, spokesman for the Council on American-Islamic Relations. So what does it all really mean, it means Kristallnacht, 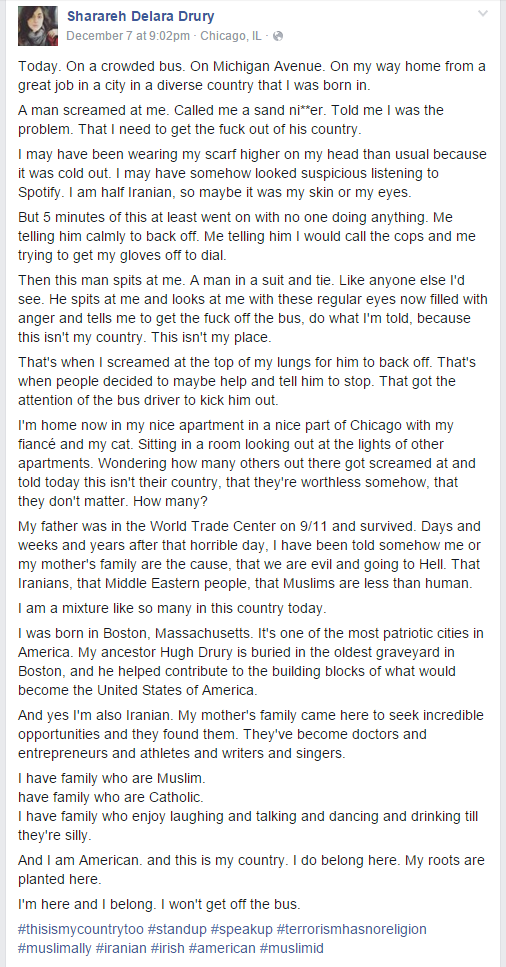 We no longer simply have to ask the question—have the GOP become a hate GrOuP? That question has now been answered.